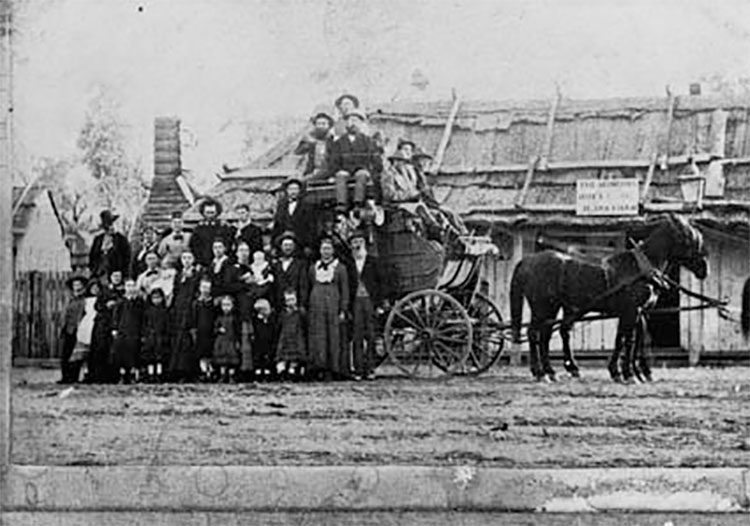 The Cobb and Co coach at Bumberry Hotel near Parkes in 1892. (Source: National Archives of Australia website)

Bumberry is one of many towns and villages in the Parkes Shire whose heyday lies in the past. Located less than 25km east of Parkes and 23km west of Manildra; Bumberry is situated in the county of Ashburnham under the cadastral map system.

Many towns had different spellings from what they have today. Bumberry has been spelt ‘Bumbury’ and was previously known as ‘Bunbury’. Bunbury was a parish, adjacent to Bindogundra parish. Bunbury was named after Lord Bunbury, an English aristocrat who was renowned for his well-trained racehorses.

A report on the proposed railway extension in The Sydney Morning Herald in 1886 stated that in “…the Bumberry Mountains was the finest timber in the colony…”. Bumberry’s rich resources went beyond timber, as in 1921 Mayor Woodward utilised Bumberry Dam as a water source for the town of Parkes.

It was one of the towns that Sir Henry Parkes visited in 1887, with special addresses presented to him by both the Bumbury town and Bumbury Public School children. Bumberry had a provisional school as early as 1878 and this school continued – relocating and being called Bumberry Siding – until December 1972 when the Department of Education closed it for good. Family names that are associated with Bumberry include Massurit, Townsend, Schnabel, Davis and Hazell.

Bumberry is known for being cooler than Parkes, and there have been several instances where it has experienced heavy snowfall. This is covered in greater detail on a blog post about snow in the Parkes Shire which can be found at www.historyparkes.org

Today Bumberry dam is a haven for picnickers, birdwatchers and those who love spending time in its serene bushland. In October last year, it was the finishing location for the National Bird Week Walk.

(This is an abridged version from Parkes Library’s history blog which can be found at www.historyparkes.org)