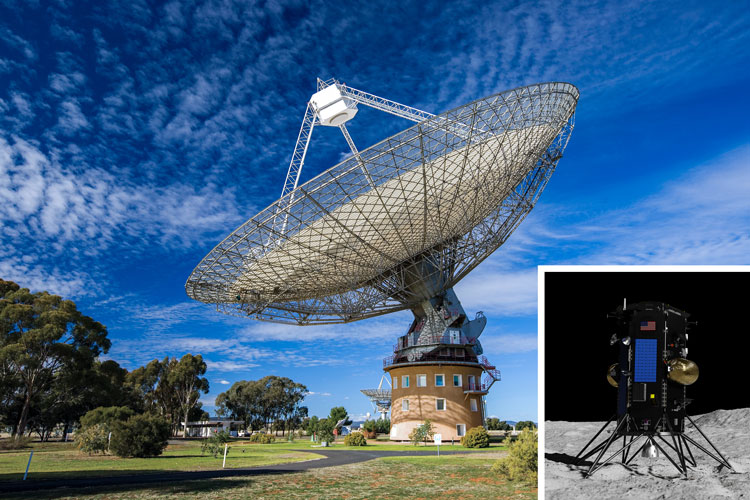 GUIDE ME TO THE MOON… The iconic Parkes Radio Telescope has re-established its connection with the Moon with a new five-year agreement with Houston-based aerospace company Intuitive Machines to support multiple lunar missions. INSET: Intuitive Machines’ Nova-C lander will deliver cargo and experiments to the lunar surface. (Photo: Intuitive Machines)

Just over 50 years ago the iconic Parkes Radio Telescope played a major role in the Apollo 11 Moon landing, and this year it will once again provide support for the first commercial lunar landings.

The Dish will help businesses to literally reach for the moon by providing ground station support for one of the first commercial lunar landings later this year.

Operations Scientist at Parkes telescope, John Sarkissian said it was an exciting time. “Just as I and many others of my generation, were inspired by seeing astronauts walk on the Moon, I’m sure many young people today will be similarly inspired. I was six years old at the time of the Apollo 11 mission, and I still vividly recall watching the moonwalk live on TV at school. So, it’s especially thrilling for me to be involved in this exciting programme, at the very place that those historic TV images were received.

John said the Parkes telescope was valuable for spacecraft tracking due to its large dish surface and advanced data acquisition systems, which were used primarily for astronomy research.

The 64-metre telescope will be the largest and most sensitive receiving ground station for Intuitive Machines’ upcoming missions, maximising the return of the scientific and engineering data for the lunar exploration program.

Intuitive Machines will launch its Nova-C Moon lander on a SpaceX Falcon 9 rocket towards the end of this year, delivering commercial cargo and five NASA experiments to investigate the local geography and test technology required for future human exploration.

Commercial Lunar Payload Services (CLPS) initiative companies are responsible for all aspects of delivering their cargo to the moon, including spacecraft tracking and communication.

Intuitive Machines Vice President for Control Centers Dr Troy LeBlanc said being the first commercial company to land on the moon was a huge communications challenge.

“We require the technical support and expertise of the team at CSIRO’s Parkes radio telescope to provide mission tracking and data downlink services.

“The successful use of the network for these initial missions will underpin the return of humans to the moon and ultimately sustainable presence under the Artemis program.”

According to John the mission in November will be an unmanned mission. “It involves developing technologies that will help deliver payloads and services to future astronauts working on the moon, and will mainly be an engineering test flight. There will not be too much to see, but future missions will undoubtedly return more exciting visuals. All the information returned will be posted on the internet, so people will be able to follow the mission online.”