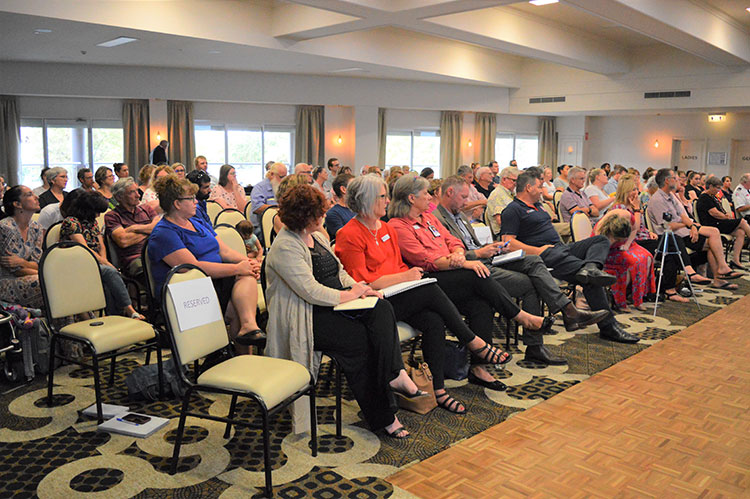 SERIOUS CONCERN… Time ran out and the audience at the public meeting on Tuesday still had many unanswered questions about the Parkes Hospital’s future.

The Parkes midwives were the heroes of the night in an otherwise disheartening public meeting attended by more than 100 people at the Parkes Services Club on Tuesday night to discuss health services at Parkes Hospital.

The emotionally charged audience included several expectant and new mothers who had nothing but praise for the Parkes midwives who continue to support them under very challenging and confusing circumstances.

The closure of the Maternity Unit in June this year at the four-year-old Parkes Hospital remained the focus of the two-and-a- half hour long meeting that did not result in any clear cut solutions.

The audience hammered the panel with direct and honest questions after Deputy Mayor Barbara Newton’s presentation on the issues and concerns raised by the community. She highlighted the underutilisation of the new hospital’s facilities saying the community of Parkes and surrounding areas were understandably confused, frustrated and extremely angry at the lack of services. “We want to see a level of service reinstated that makes our community safe and secure.”

The main message of the night was that there was no quick solution to the problem and that Lachlan Area Health would not rush into a service that is not safe.

CEO of Western NSW Local Health District Scott McLachlan said a positive step was a meeting they had secured with the State and Federal Government to present a new model of management. The out- comes of the public meeting will also be submitted to the NSW Minister for Health, Brad Hazzard.