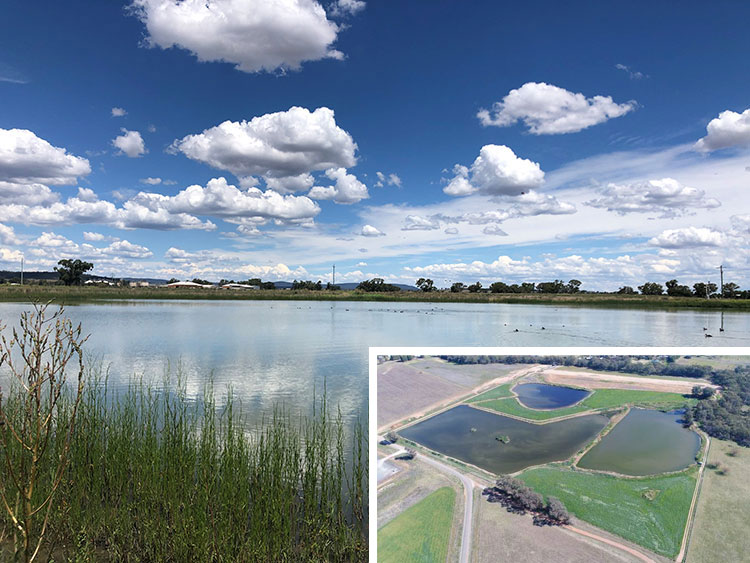 A view of the ponds as they currently look. . INSET: The former sewage treatment plant ponds around 2015 when they were still part of the treatment process. This is where the wetland will be developed.

Parkes residents have helped to shape a new natural habitat for wildlife to be developed in the coming months.

More than 500 native trees and shrubs have already been planted ahead of the new wetland project, which will reimagine the town’s former Sewage Treatment Plant ponds into a wetland system.

The Parkes Wetlands will be located adjacent to Goobang Creek and contain three ponds that were previously used for treatment and storage of treated effluent prior to the construction of Parkes’ new STP and Advanced Water Recycling Facility. Community members took part in the planting as part of National Tree Day events this year and 2019.

The wetlands are part of Council’s ongoing efforts to create and preserve natural habitats for wildlife in order to safeguard our region’s biodiversity for future generations. The wetlands will function as an ephemeral wetland system, with flows of recycled water delivered to the ponds when not required for irrigation of Parkes’ greenspaces.

The key approach for the wetlands is to incorporate a range of habitats that would occur naturally in a riverine zone in Central West NSW. The design aims to ensure that links to surrounding habitat are established, with future planting around the site geared towards creating better linkages to the high-quality riparian habitat surrounding Goobang Creek.

Wetlands are important spaces for waterbirds, especially in drier landscapes, and this project presents an opportunity to attract vulnerable, threatened and critically endangered species back to the Parkes region.

The long-term project is expected to take around three years to fully complete. Parkes Shire Council’s Environmental and Sustainability Coordinator Michael Chambers said additional funding would be sought to in-stall walking tracks, bird hides, seating and shelters, and other infrastructure to open the space for the community to utilise and enjoy. “It is hoped certain sections of the wetlands will be open to the public to visit by late 2023.”

As wetlands are among the most threatened ecosystems around the world, this project will be vital for the Parkes region. According to the IPBES Global Assessment Report on Biodiversity, over 85% of wetlands have been lost globally. Inland waters and freshwater ecosystems have among the highest rates of decline, with only 13% of Australia’s wetlands remaining in 2000.

Natural wetlands in the Central West region are generally in poor condition due to high levels of vegetation clearing, poor water quality, grazing and feral animals. Therefore, the construction of artificial wetlands is essential for providing habitat in the face of accelerated biodiversity loss and a changing climate.

“Much of the tube stock has been grown from locally acquired seed, so we know that the species we have planted are adapted to this site. This means they have the best chance of surviving” according to Michael.

The wetlands project has been supported by the NSW Government through its Environmental Trust.