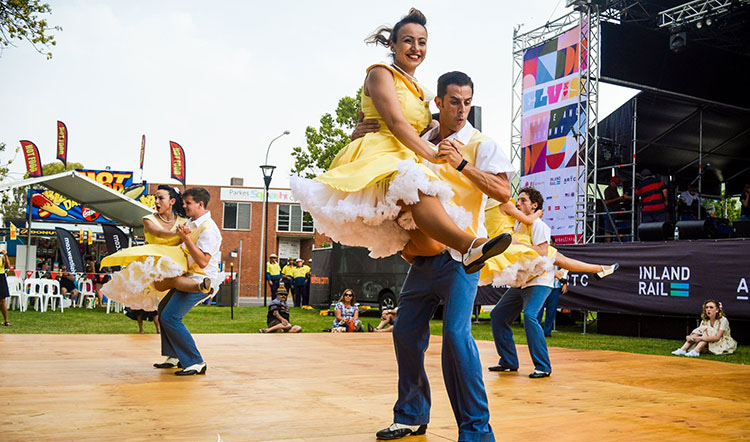 ROCK ON 2022… The cancellation of the 2021 Parkes Elvis Festival was received with a lot of sadness and understanding, but excitement is already ramping up to make the 2022 festival the best one ever. The Sydney Swing Katz showed the way to celebrate at this year’s festival with their amazing dance moves.

News of the cancellation of next year’s Parkes Elvis Festival has gone viral around the world with more than 50,000 messages of support logged on the festival’s Facebook page earlier this week.

The overwhelming sentiment from fans has been that it is very sad, but necessary under the current COVID situation, and everyone is looking forward to 2022.

“So sad, but think how great the atmosphere will be in 2022. Congratulations on doing the right thing Parkes, we will miss you,” said one fan. Another said: “We will be back in 2022 with blue suede shoes on. The King will understand. What a party it will be in 2022!”

The same sentiment came from participants in Parkes. “It is probably the best for the safety of our senior volunteers and the community, especially if there is another outbreak,” said Al(vis) Gersbach, who has transformed into Elvis for the past 16 years. “Let’s wait for 2022 and fully enjoy the spirit of Elvis as it should be, The King of rock and roll. Thank ya very much.”

Parkes’ very own Elvis tribute artist Barry Green also said it was the right decision. “We hope 2022 will be bigger and better and we can all have a great and safe time.” Cathy said the positive outcome of this was that the festival had captured a much wider audience reaching people they had not reached before, “and we are going to capitalize on that”.

“This means 2022 is going to be huge as it is Elvis’s birthday on the Saturday and a massive night is planned at the new stage in Cooke Park.” A greater influx of people is also expected to pass through Parkes on their way to the 50th anniversary of Australia’s largest music festival, the Tamworth Country Music Festival.

“It is good that we now have lots of time to really fine tune eve- rything, but we are keeping the Speedway theme as so many fans have already started work on their costumes.”

While there have been some suggestions to still play Elvis music in town next year when the festival would’ve been on, or do other smaller events, Cathy said they only planned some online events for the Friday and Saturday. “We will pay tribute to Elvis and festivals past and promote 2022. We do not want a mini festival and create the wrong impression of what the Elvis Festival is really about.”

Cathy said the months leading up to the final decision were agonising. She had to make some very tough calls last week to many people whose livelihood depend on events like the Elvis Festival, like the entertainers, market stall holders and many more. “They mean so much to us, we will miss them and we want them to come back.”

But she said the Parkes community had to have the final say and it was the best decision to send out the survey to the community and ask them for feedback. “We had more than 1,200 responses from residents, business owners and volunteers with 80.9% across all categories saying no. It is very sad, but the right decision.”