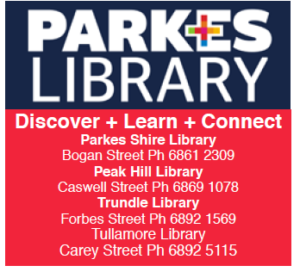 EXHIBITION – Local Australian Gothic 3 to 28 July
Alice Stokes returned to Parkes in late 2017 after a number of years honing her creative skills and process in Berlin and is sharing some of her work with Parkes Library for an exhibition during July. Due to Alice’s love of film noir and the colour black she primarily draws with graphite on black paper or charcoal, creating stark, evocative images that are only revealed as the light catches the graphite.

AUTHOR VISIT – Kim Kelly Thursday 26 July, 6pm, Parkes Library
‘Lady Bird & The Fox’ – It’s 1868 and the gold rush sprawls across the wild west of NSW, bringing with it a new breed of colonial rogue – bushrangers. It is a world far removed for hardworking farm girl, Annie Bird, and her sleepy village on the outskirts of Sydney. But when a cruel stroke of fortune sees Annie orphaned and outcast, she is forced to head for the goldfields in search of her grandfather, a legendary Wiradjuri tracker. Determined and dangerously naive, she sets off with only her swag – and is promptly robbed of it on the road. RSVP by 24 July on 6861 2309 or parkes.library@parkes.nsw.gov.au

AUTHOR VISIT – Kim Hodges Saturday 28 July, 10am, Parkes Library
Kim has lived with mental illness for the past five years: bipolar 2 disorder, severe depression, generalised anxiety disorder, and post-traumatic stress disorder. ‘Girl Over the Edge’ follows from her incredibly successful debut memoir ‘Girl on the Edge’, and will take the reader into severe episodes of depression, on the road to recovery and everything else in between. RSVP by 26 July on 6861 2309 or parkes.library@parkes.nsw.gov.au