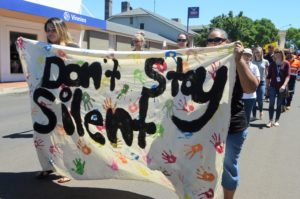 Traffic came to a halt in the Parkes CBD on Monday morning with business owners leaving their shops to encourage a crowd of over 100 people marching down Clarinda Street in support of White Ribbon Day. Parkes is one of many communities across the country taking a stand to end domestic violence with the aim of creating ‘an Australian society where all women can live in safety, free from violence and abuse.’

Many local groups, clubs, schools and businesses were represented in the Parkes march from the Parkes Arbour to Cooke Park where the participants listened to speeches led by Lionel Lovett’s traditional Welcome to Country.

Police District Chief Inspector, David Cooper pledged continued police support in the area of domestic violence and asked for the public to assist by speaking out in order to challenge and change this problem. “This is a community issue not just a police issue. What you know and what you do could save someone’s life,” said Chief Inspector Cooper.