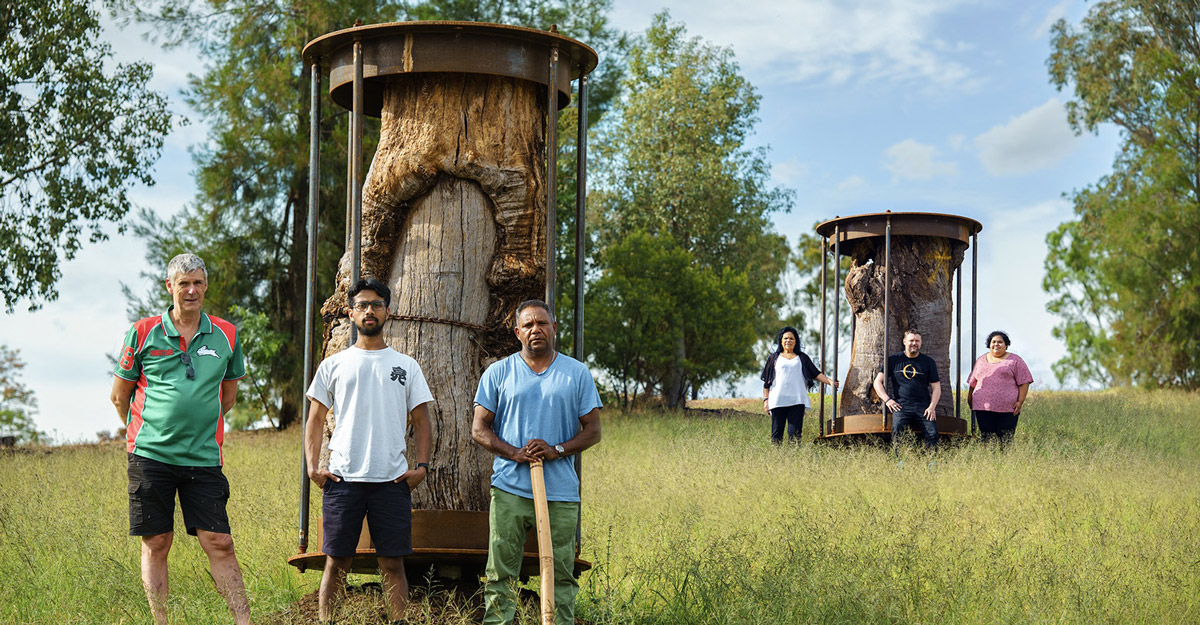 Tanjim Islam met with some of the elders involved with the Wiradjuri Ngurambang project and members of the Parkes Wiradjuri Language Group. Here they are at the relocated scar trees at Bushmans Hill, from (L-R) are Geoff Anderson, Tanjim, Lionel Lovett, Kelly Thompson, Sean James Cassidy and Iesha Thompson.

Graphic designer and animator Tanjim Islam came to assist in the production of a video to accompany the Wiradjuri Ngurambang project at the Parkes Library and Cultural Centre.

Tanjim was born in Bangledesh, lived in New Zealand for his early years and moved to Australia with his family in 2000. He studied at Auckland Media Design School (MDS) and has been associated with Ub Ubbo Exchange for many years.

Tanjim met with some of the elders involved with the Wiradjuri Ngurambang project and members of the Parkes Wiradjuri Language Group. He spoke about his own heritage and culture, sharing information on his Bengali language.

Tanjim assisted Sean James Cassidy and Kerrie Peden with filming interviews and producing assets for animation, to be used in the digital component of Wiradjuri Ngurambang. As he had not had the opportunity to work in country NSW before, Tanjim enjoyed a warm welcome and appreciated being invited on country to film location shots and to learn about Wiradjuri culture.

Tanjim said the visit had changed his perception of country towns. He commented on the greater accessibility, with many things being closer and the ease of travel without needing to battle traffic. “There is definitely a pulse and a buzz about Parkes. There is great potential in this town and I will definitely look forward to another visit,” he said.

In another development, Sean James Cassidy has learned that elements of the video he created for the song, I Am My Elder’s Blood, were selected to be used at the World Expo 2020 in Dubai next year. The song in Wiradjuri language, was a collaboration with the Parkes Wiradjuri Language Group and selected by First Languages Australia as the theme song for Mother Tongue Day.