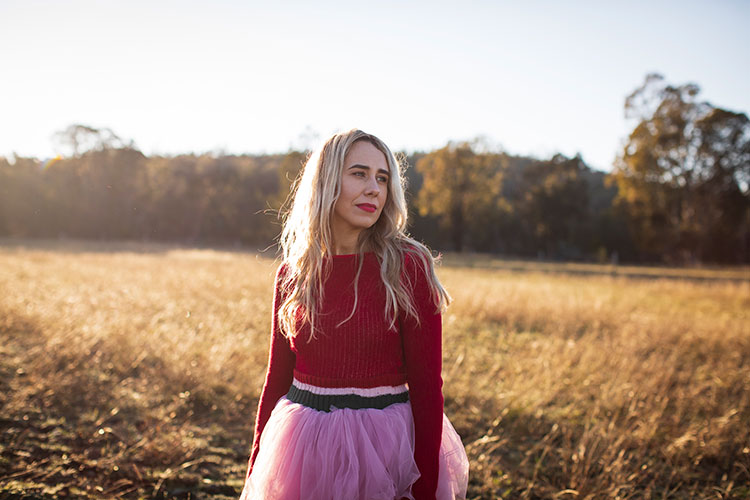 COUNTRY GIRL… Raechel Whitchurch on her parents’ property outside Parkes where she filmed the video for her latest single ‘My Father’.

When your life reads like a country song, including a song about your father on your debut album would come as no surprise.

Raechel Whitchurch always wanted to write a song about her dad. “We are such similar people, but it felt like I would never be able to find the right words. I’d been working on the song for three years and I’d finally said everything that I needed to, but I never imagined that a song so personal would make it on to my record.”

Raechel, who moved to Parkes from Broken Hill with her family when she was 18, has just released the single ‘My Father’ and its video filmed on her parents’ property outside Parkes featuring her dad, Steve Lee.

Although Raechel has been living in Sydney for 10 years, she still likes calling Parkes home as her family is still here. She wanted to replicate her childhood memories with her dad and decided to film the video in the beautiful landscape around Parkes.

“When I was a kid, we spent a lot of time in the bush as a family. We’d go camping and shooting, and would always sit around a campfire at the end of the day and sing songs. I knew that my parents’ property would be perfect for the video.”

Raechel was born and raised on country music. She started playing piano when she was five, and then traded it in at eight for a mandolin. Guitar and banjo soon followed, and so did the songs.

In 2019, Raechel realised she had more than enough songs for a full-length album, and she felt ready to put those songs out into the world.

“I went into the studio with my producer Matt Fell over the New Year’s break of 2019/20 and recorded my entire album. I wrote all the songs myself, with the exception of two. One I co-write with Colin Buchanan, and one with my husband, Ben Whitchurch.” Ben is also a Parkes boy.

There is no release day yet for the album, but the aim is early next year. Raechel has released two singles from the album so far: ‘I Found Home’ in March, and ‘My Father’ last month.

While releasing a first single amidst a worldwide pandemic has its challenges, it seems that fans and artists are excited for her new music. Country music star Adam Harvey said: “I have watched Raechel’s career since she was a kid performing in her family band and it’s been fantastic to see her grow as an artist, a singer and a song-writer. This latest single demonstrates her real talent.”

Raechel impressed her fans in 2016 with her debut EP ‘Outlaw’ when it opened at #1 on the Australian Country iTunes charts (ahead of Taylor Swift, Carrie Underwood and Chris Stapleton).

All Raechel’s music is available online for streaming and download via Spotify, Apple Music, iTunes, Youtube and all other streaming platforms. You can watch the video of ‘My Father’ here