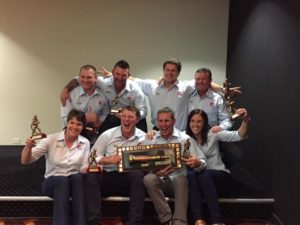 The Northparkes Mines Emergency Rescue Team (ERT) won three events at the Victorian Mine Rescue Competition in Bendigo last weekend. The national competition was held for the 23rd year and attracts teams from mines
across Australia. Northparkes came first in fire, ropes and theory, and second in first aid.

The team was also ranked first for safety across the three days and team captain Jamie Pope was placed third for his leadership during the competition. Other members of the 2016 Northparkes team were Travis Beaton, Wayne Logan,
Linda Snyman, Jack Medlyn, Mat Allan and Brooke Lees. Northparkes Managing Director Stefanie Loader said: “Our consistent success at this competition reflects the team’s hard work to stay at the leading edge of emergency response practices. We are enormously proud of our competition team, only three of whom had competed before.

“Our congratulations go to the winning team from Evolution Mining. It’s great to see another company operating in NSW’s Central West bring home the trophy,” Stefanie said. This year’s competition took place in the Bendigo region at Newmarket Gold’s Fosterville Gold Mine. Teams competed in a number of challenges demonstrating theoretical
and practical mine rescue skills.

Northparkes Manager People, Safety and Environment, Angus Wyllie said: “Zero harm operations is our approach to all we do, and our ability to respond to emergency scenarios is a critical part of this. Competitions such as this allow us to practice our skills and benchmark ourselves against others in the industry. It’s great to know that our ERT is always ready to assist us and others in times of need. “ Northparkes has sent its Emergency Response Team to the competition for the past 20 years, and was named overall winner in 2009, 2014 and 2015.