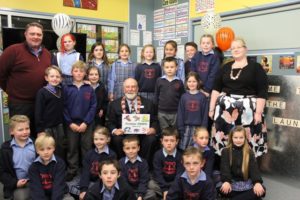 A class of year two students of Parkes Public School has created a book about endangered animals called “Precious Wildlife”. Parkes Mayor, Ken Keith, officially launched the book, at the Parkes Public School Library last Wednesday.
The book’s journey began when year 2 teacher Zoe Ruckley took a holiday on the Great Barrier Reef and noticed it wasn’t nearly as colourful as she thought it would be. This led to an investigation with her students on the effects of global warming, and the class learned that there were many other animals at risk of extinction.

“The students were so interested in learning about the black Rhinoceros and the southern corroboree frog that they each selected an animal from the endangered species list to research.” Zoe said. The students complimented their research with art projects, and their notes and illustrations were compiled into a beautiful book.

“The students wanted to share their information so that we might be able to help save their chosen animal, so we created this book” Zoe said. “These students are aged eight, so this is an amazing effort on their part.” Parkes Public School relieving principal Ben Smith proudly hosted the proceedings with the excited students, their families, and teachers revelling in the occasion.

The school gifted a copy of Precious Wildlife to the Parkes Library, which will be held in the Local History collection. The library will purchase more copies for general borrowing. Mayor Ken Keith officially launched the title, lending both gravitas and levity to the occasion. “What is the tallest building in the school?” he asked the students, “the library of course; it has the most stories.” And thanks to the diligent work of these young writers, the library has one more.

Precious Wildlife can be ordered at the Parkes Public School office.