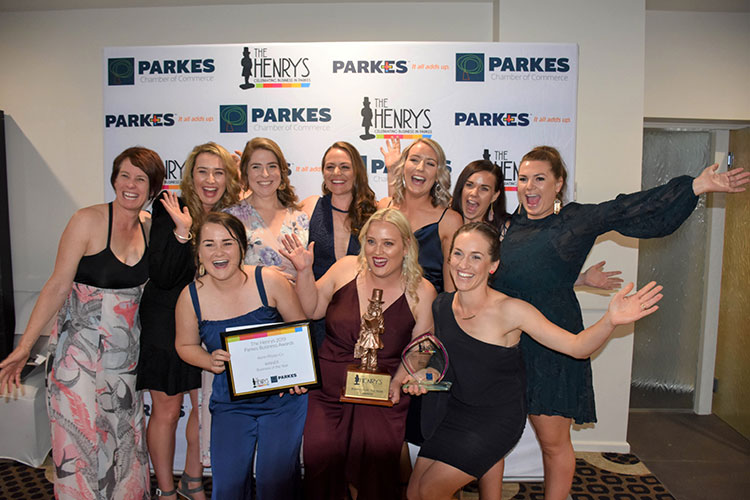 A mere three years after starting out, Kerin Physio Co took out the top gong at last Friday’s The Henrys – Parkes Business Awards.

Rachel Kerin and her team not only won the prestigious Henry for Business of the Year, but also triumphed with the Excellence in Professional Services Award at the annual event.

Rachel credited her team saying: “They are a group of women who are amongst the most talented, genuine and passionate women I know. Women who I am so privileged to work alongside.”

“We are so humbled to be The Henry Parkes Business of the Year and so very grateful for everyone who has supported our business.”

La Bella Medispa, who also won the Excellence in Personal and Lifestyle Services Award. Many more individuals and businesses were winners on the night as awards were given out across 14 categories.

The Parkes Phoenix won Excellence in Micro Business Award. Our Senior Advertising Executive, Sylvie Everingham-Potts said: “I would like to thank the Parkes Chamber for organising this event, and all our supporters. It is because of you we get to do what we do for our community and we appreciate every one of you. As a small business here in Parkes we feel what you feel during times of hardship, such as the current drought.”

Other double award winners on the night included Parkes PCYC and its manager Tim Watts who won the Excellence in Social Enterprise Award and Tim, the Outstanding Business Leader title.

The 2019 Ken Birch Memorial Hall of Fame was awarded posthumously to for- mer Parkes Public School principal Leanne Breaden. She passed away at the end of 2017 from ovarian cancer. Her husband Peter Breaden and son Joel accepted the award.

The gala event also went pink in support of the first Pink Up Parkes campaign featuring a pink theme. The Parkes Chamber of Commerce also donated $5 from every ticket sold and handed over a cheque of $1,260 to the McGrath Foundation.