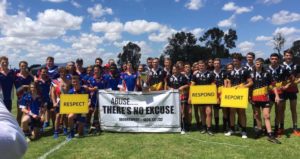 Forbes High School won the inaugural CMOC-Nortparkes Mine Domestic Violence Cup against Parkes High School last Friday with a final score of 30-18. Parkes were leading by two tries and looked very strong, but Forbes came
through to become the first ever winners of the cup with female referee Shanika Harpur doing an amazing job. The game only ran for three 20-minute periods due to the heat.

The Parkes High boys are keen to do more next year for White Ribbon education that would get more of the school involved. The cup will become an annual event with alternating venues each year, which means Parkes will host next year. There are also plans to possibly have a girls’ league tag game too next year.

All in all it was a successful day with the Girri Girri students performing a welcome and cleansing ceremony before the game, Forbes Domestic and Family Violence Committee putting on a free barbeque for everyone, and a minute silence was observed at the start of the game in memory of victims of domestic violence.