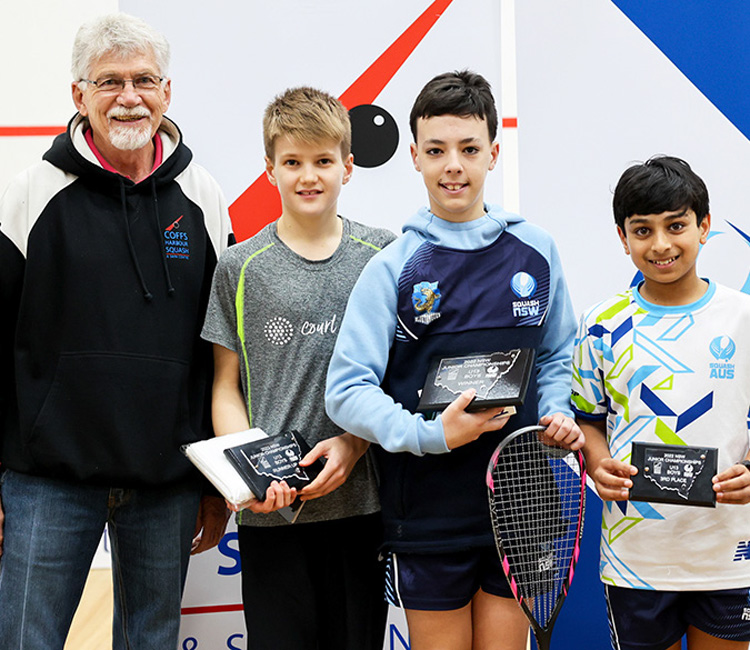 Henry Kross (middle) after his win at the NSW State Championships in Coffs Harbour. On his left is runner-up James Boswell (QLD) and Kieran Willathagamuwa (Sydney) in third place. (Photo: Coffs Harbour Squash)

Parkes squash player Henry Kross is number one in Australia after winning the NSW State Championships for boys under 13 in Coffs Harbour recently.

He was number 2 heading into the championships, but after a tough final against James Boswell from Queensland the new title pushed him into the number 1 spot. He came back from 2-1 down to win the title 3-2.

Henry was also number 1 in January for a short while, but each tournament is worth points and graded and weighted.

He has a busy time ahead of him as he is off to Daisy Hill, Queensland with the NSW CHS team in August, and a NSW State team camp in Sydney early in September before he flies to Perth with the NSW Bluetongues at the end of September for the Australian Junior Championships.

He also has to perform well at a few regional tournaments and camps as his aim is selection for the Australian under 13 team to compete against New Zealand in Sydney during December. Only two players per age group will be picked which makes it very tough with some very talented players vying for selection.