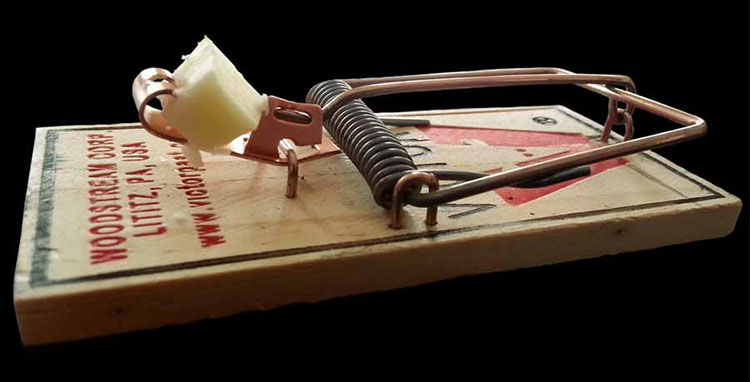 “I can see the funny side of it. It’s the only thing which has kept me going through all this.”

The mice moved in during the second week of my farm stay. Found mouse droppings on my bedside table. Sounded like they were having a party in my bedroom. I don’t keep food in my bedroom so they were out of luck! I remove two pillows on my bed and you guessed it! Mouse droppings on the edge of the sheet and mattress. I hear mice in my bedroom each night, turn the light on, bang the side of the bedside table scaring the mice away for a short time. All is quiet for a few hours and they start again.

I leave the TV on in my room to create white noise so I can’t hear the mice running around and doing what mice do. This morn-ing a mouse in the bathtub. Left him there, scrabbling, trying to get out. Later he had an accident with a shoe. The next night a frog was in the shower! Later a mouse bit my finger while I was asleep in bed. It means one part of me is still soft and juicy. I suppose that’s better than being old and crusty! I can see the funny side of it. It’s the only thing which has kept me going through all this.

Put party food out for the mice last night. Each night the mice partied on. I could hear them running around in my room, some fights and arguing, running along the wall near my bed. I swear there were baby mice in the room as I could hear their squeaks. A few times I felt mice on my bed which was a bit too close! I had party food in my bed-room and two traps loaded with peanut butter. Eventually I put food and traps at the entrance to my bedroom. I trap four mice in my bedroom. By this stage I wasn’t getting much sleep.

A mouse scoots between the TV and fire-place each night. Little bugger. BBQ has mouse droppings on it. I pour boiling water on the plate so I can use it. After use I clean it and put alfoil over it. Took them three days and they start chewing the alfoil. Party Central behind the TV last night. Then they had an after party in my room. Must be teenagers. Started about 11pm and went off and on till 6am. Little buggers! Not much sleep. Tonight, they are given more party food behind the TV; they eat the lot. Put packets of Ratsak in a bedroom and in the kitchen fireplace.