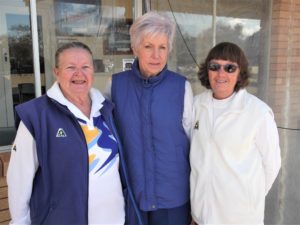 The winners of the Parkes Women’s Bowling Club Championship Triples are Gwenda Carty, Rhona Went and Cherie Frame. They played Merilyn Rodgers, Marja Iffland and Maree Grant on Tuesday in a very closely contested game with the final score 16-13.

The final will be played next week, between Merilyn Rodgers, Marja Iffland and Maree Grant vs Cherie Frame, Gwenda Carty and Rhona Went.

In a pairs game Chris Cox and Margaret Hawken defeated Jean Kennedy and Flo Riseborough. Winners for the day were Merilyn, Marja and Maree. There will be a committee meeting on Tuesday, 1st August at 1.30pm. New shirts
and jackets must be ordered with Brenda by Tuesday please.

The Classic Triples will be held at the Club on 19th and 20th August. Entries open now. Teams from several towns will be playing with excellent bowls expected, a great day of bowling to watch.

The Trading Table and Shared lunch was attended by several members and many prizes were won. The Raffle was won by Lorraine Heald and winners on the day were Chris, Maureen, Rhona. To play social bowls please ring Table
Selectors Audrey Jones and Betsy Johnstone between 9 and 9:30am on 6862 1446. Social roster Chris Cox.

Winners for the day were Jean, Marja and Gwenda.

The First Round of the Club Champion- ship Triples will be played on the 18 July with draw as follows;

There will be a Trading Table and Shared Lunch held next week. A Committee Meet- ing will be held Friday 14 July at 2pm. To play social bowls ring Table Selectors Betsy Johnstone and Audrey Jones on 68621446. Social roster Liz Byrne.

It was a cool, crisp day for bowls with three games of triples played.

Winners for the day were Lorraine, Rosemary and Joan.

In the District Fours played at Cowra, Min- nie Riordan, Robyn Morgan, Audrey Jones, Joan Simpson were the Runner ups in a great day of bowls.

Forbes on Thursday 6th July. Players are encouraged to arrive by 9.15am, play will commence at 10am, followed by a picnic lunch.

To play social bowls please ring Table Selectors Betsy Johnstone and Audrey Jones between 9am and 9:30am on 68621446. Social Roster Brenda Davies to bring milk. 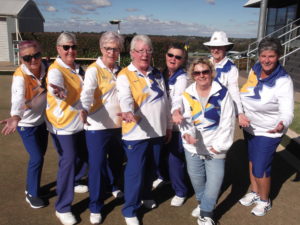 Next week teams will play in the CWD Fours to be held at Cowra.

The Trading Table was a great success and many prizes were won. Raffle winner was Gwenda Carty. Winners for the day were Eileen, Margaret and Betsy. Runners- up were Merilyn, Rosemary and Robyn. 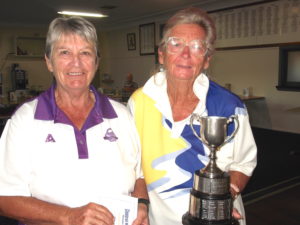 One game of consistency was played with Merilyn Rodgers first, Di Howell second and, Maureen Miller third. Other bowlers have been competing in the CWD pairs at Railway Diggers this week.

Nominations for CWD triples close today. The Number 2 Pennant players will be play- ing in the district playoffs at Dubbo on 30th and 31st May.

In the CWD singles played last week the winner was Pat Cooney who defeated Col- leen Crump from Canowindra in a nail biting final. Pat now goes on to play the other dis- tricts in Blayney.

The Minor Singles are open until 2nd May. A Mother’s Day competition will be held on 2nd May, please put your name on the board to play and wear something pink.

In the next round, Brenda Davies, and Betsy Johnstone will play Rhona Went and Liz Byrne; Minnie Riordan and Joan Simpson will play Elaine Miller and Maree Grant. Nominations for CWD Pairs close 7th April. There will be no social bowls next week as the CWD Singles will be played.