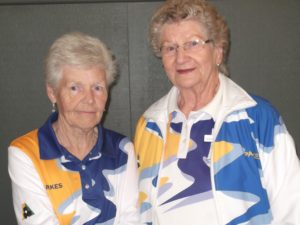 The Minor Pairs was played at the Parkes Women’s Bowling Club this week. It was a great game with the score tied on the last end(18th) at 17 – 17. An extra end had to be played to determine the winner. Isobel Svendsen and Frances Charlton got 1 point on the extra end and won 18 – 17 against Laurie Keane and Marja Iffland. Team with Col Hayward as a Skip and Geoff Williams, the youngest District senior and probably the youngest Zone senior, as a Reserve. Also local Parkes identity and renowned bowls administrator, Steve Torrens, was appointed as the Zone 4 Team Manager. Played over two weekends, the Central West District Bowls Association Triples Championships culminated with the finals on Saturday 5th March 2016 at the Condobolin Bowling Club. In the 25 end final Condobolin’s Brett Byrnes, Peter Brasnett and Geoff Williams were opposed to Parkes Graham Barby, John Davies and Col Hayward. After ten ends Byrnes, Brasnett and Williams had a 10 to 5 lead over Barby, Davies and Hayward.

By the eighteenth end the lead had been whittled back to 14-13 and the close tussle continued on with Byrnes, Brasnett and Williams holding onto a 17 to 16 lead after twenty two ends. In the remaining three ends the Condodolin team, who led all the way, picked up a shot on each end to win 20 to 16 and become the 2016 CWDBA Triples Champions. Congratulations Condo!